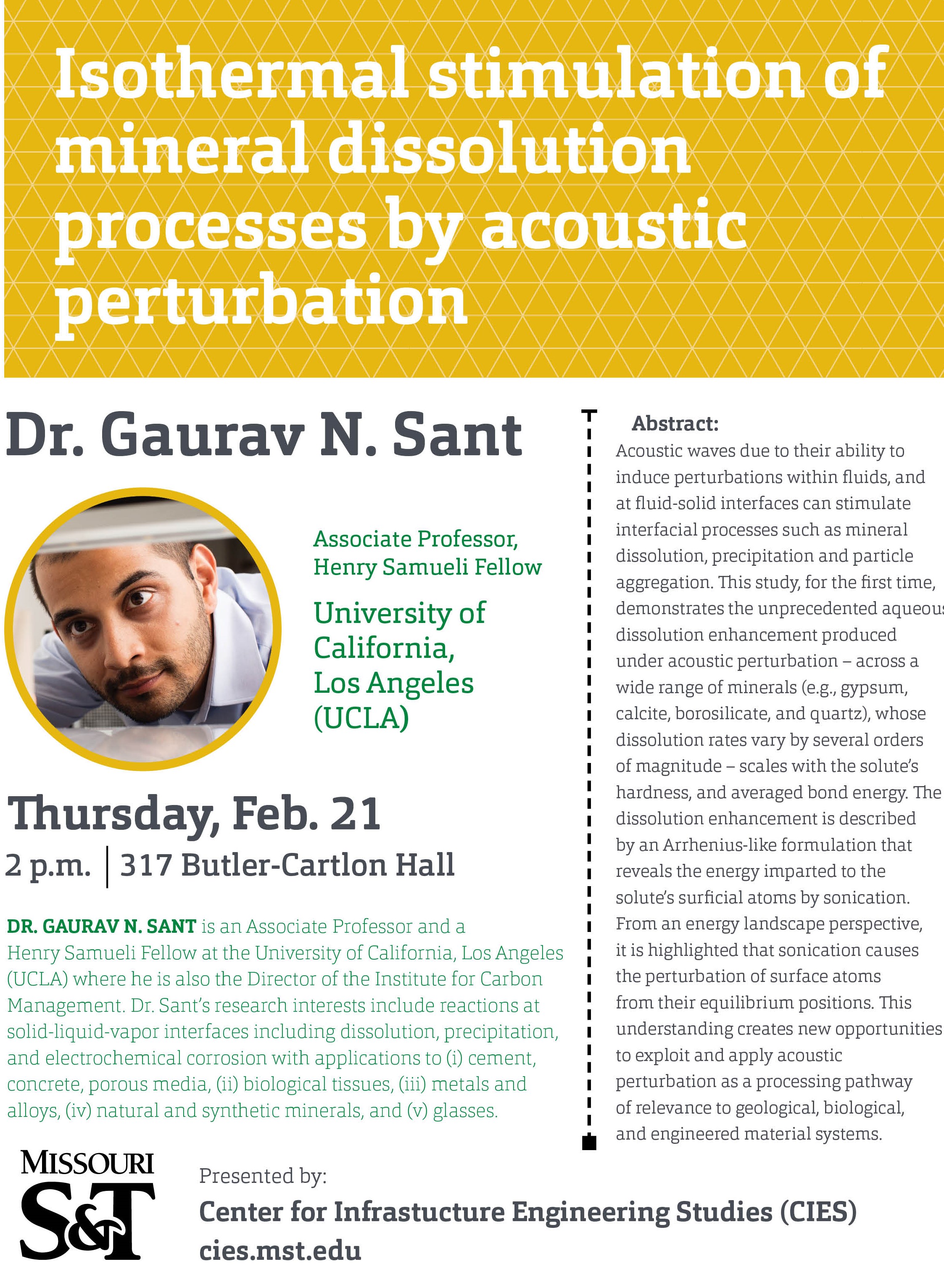 Abstract: Acoustic waves due to their ability to induce perturbations within fluids, and at fluid-solid interfaces can stimulate interfacial processes such as mineral dissolution, precipitation and particle aggregation. This study, for the first time, demonstrates the unprecedented aqueous dissolution enhancement produced under acoustic perturbation – across a wide range of minerals (e.g., gypsum, calcite, borosilicate, and quartz), whose dissolution rates vary by several orders of magnitude – scales with the solute’s hardness, and averaged bond energy. The dissolution enhancement is described by an Arrhenius-like formulation that reveals the energy imparted to the solute’s surficial atoms by sonication. From an energy landscape perspective, it is highlighted that sonication causes the perturbation of surface atoms from their equilibrium positions. This understanding creates new opportunities to exploit and apply acoustic perturbation as a processing pathway of relevance to geological, biological, and engineered material systems.

About Dr. Sant: Dr. Gauvan N. Sant is an Associate Professor and a Henry Samueli Fellow at the University of California, Los Angeles (UCLA) where he is also the Director of the Institute for Carbon Management. Dr. Sant’s research interests include reactions at solid-liquid-vapor interfaces including dissolution, precipitation, and electrochemical corrosion with applications to (i) cement, concrete, porous media, (ii) biological tissues, (iii) metals and alloys, (iv) natural and synthetic minerals, and (v) glasses. In his research, focus is placed on understanding the mechanistic origins of formation, degradation and aging of such materials in environments of relevance to engineered, biological and geological systems. The outcomes of this work are described in > 100 refereed journal publications. Dr. Sant also leads Carbon Upcycling UCLA / CO2Concrete: a pre-commercial venture based at UCLA that was recently selected as a Finalist in the NRG COSIA Carbon XPRIZE Competition, and as a Global Top10 Innovation at The International Cool Earth Forum 2018. Dr. Sant's research has been recognized by numerous awards including: the National Science Foundation's CAREER Award, a Hellmann Fellowship, RILEM's Gustavo Collonnetti Medal, the American Concrete Institute's Walter P. Murphy Jr., and J.C Roumain Awards, and selection as one of UCLA's Optimists. Dr. Sant received his B.S., M.S. and Ph.D. in Civil Engineering from Purdue University in 2006, 2007, and 2009, respectively.

REFRESHMENTS WILL BE PROVIDED

© 2021 - Curators of the University of Missouri | UM System | Privacy Policy | Terminalfour
Missouri S&T is an equal opportunity/access/affirmative action/pro-disabled and veteran employer and does not discriminate on the basis of sex in our education programs or activities, pursuant to Title IX and 34 CFR Part 106. For more information, see S&T's Nondiscrimination Policy or Equity and Title IX.